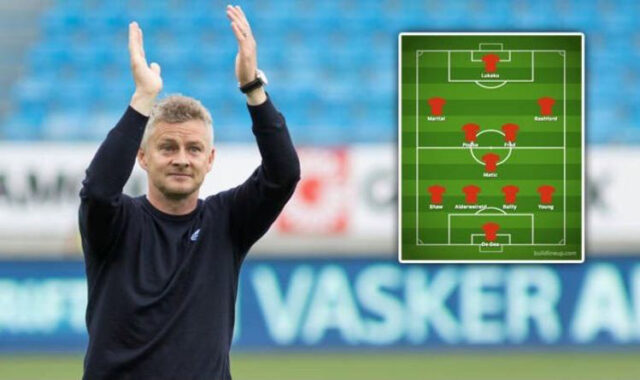 It’s time for our predicted Man Utd XI for their all-important Europa League game against Granada.

Manchester United Football Club have a real opportunity to help Ole Gunnar Solskjaer win his first trophy as Manchester United manager. Now, obviously, that’s easier said than done but the Old Trafford club are named as favourites for a reason.

Sure, we’d all like to be playing in the Champions League this term, but we’ll get another crack at that whip in 2021/22. Why not go all out to lift this trophy in the here and now?

Ahead of the game, the Baby Faced Assassin is dealing with some injury issues. Anthony Martial is unlikely to feature, while who knows if Alex Telles is ready. Eric Bailly has COVID-19 and Marcus Rashford hobbled off in the second-half against Brighton. Anyway, let’s get right into it…

Check out our predicted Man Utd XI vs Granada in full here:

I’ve gone for Dean Henderson in between the sticks, though I’m sure the gaffer is tempted to rotate and give David de Gea some minutes.

Aaron Wan-Bissaka always starts when fit and I see no real reason to change that at this point. Luke Shaw will play over on the left-hand side. Harry Maguire will start and captain the Reds, with Victor Lindelof making up the back four. Let’s hope his back is holding up okay.

Scott McTominay will be feeling fresh after being rested at the weekend. We’re certainly going to need his energy and physicality here. I’ve gone for Fred ahead of Paul Pogba, purely because the Frenchman needs some rest, while Bruno Fernandes always plays when fit.

I’m hoping and praying Rashford is fit enough to go and give us at least an hour here, with Daniel James starting over on the right-hand side. Mason Greenwood was miles sharper than Edinson Cavani on Sunday, so he gets the nod in this one.

There is quality aplenty on the bench but in truth, United should have more than enough gas in the tank to win this one – and pretty comfortably, too…