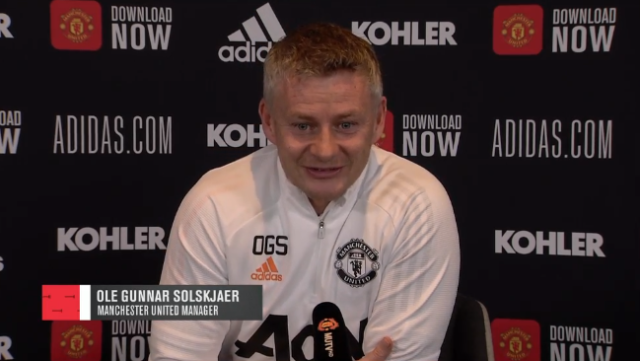 🗣Solskjaer: “I talk to my players every day. Paul is no different. The disappointment this week is being knocked out of the Champions League. What everyone’s representatives say cannot affect me. I said everything I wanted to about it. “
🗣Solskjaer on defense: “There are a lot of things we can do better. We want to defend maybe higher. We were caught midweek and they scored from crosses which was disappointing.”

🗣Solskjaer: “Of course we were disappointed on Tuesday night, that’s natural, we really wanted to qualify. We have to move on. It was a tight group, decided by little details, you can see it in most matches.”

🗣Solskjaer: “The Manchester derby is probably the best game you can ask for after such a disappointment.”

🗣Solskjaer: “David is a top goalkeeper and rightly makes the list of Europe’s best goalkeepers. He has faced criticism in the past, he’s someone we really rely on . “

🗣Solskjaer: “I hope he won’t be affected by the critics and I don’t think he will.”

🗣Solskjaer: “I have a feeling that we are improving and that we are more like a Manchester United team. Everyone says we are not consistent, but we have won our last four league games.”

🗣Solskjaer: “It’s an improvement compared to last season [in EL], these six games [of CL] were tests, because we played against two great teams, the finalist and the semi-finalist of the last year we learned that every small mistake will be punished. “

🗣Solskjaer: “We were very close to passing in a very good group, which shows me a progressing team. We struggled to beat Astana, Partizan convincingly, we have made progress over the year last. “

🗣Solskjaer: “We still have a bit of a way to go to compete and win the Champions League, because it’s our goal to win trophies and be contenders.”

🗣Solskjaer: “I think all players are the same. Any player who plays football should be disappointed to lose one game. They want to bounce back and win the next one. We handled the setbacks well.”

🗣Solskjaer: “It’s important not to panic because you can’t win every game. Some games will hurt more than others and will have more consequences than others. We have to get back to the Champions League by improving ourselves . “

🗣Solskjaer: “We are looking forward to the [Europa League] draw and we want to go as far as possible. Of course it would be special to play against Molde, I’m glad they qualified.”

Anthony Martial is back to face Manchester City. For Edinson Cavani, a decision will be made later.