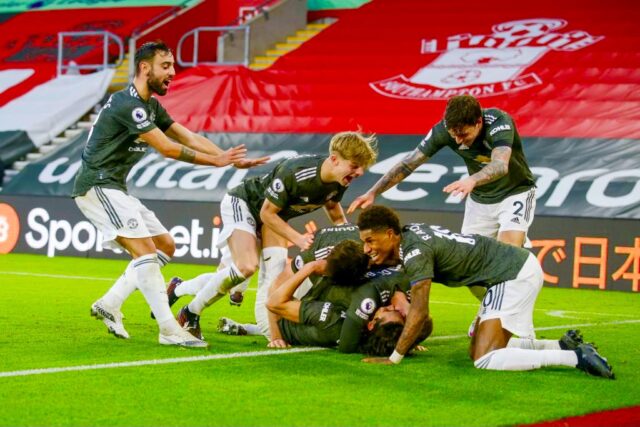 Manchester United boss Ole Gunnar Solskjaer has confirmed Alex Telles picked up a slight knock in the 3-2 victory over Southampton on Sunday. And the Norwegian has also spoken out on David De Gea, Luke Shaw, Scott McTominay, Paul Pogba, Anthony Martial, Jesse Lingard and Phil Jones. The Red Devils are next in action against Paris Saint-Germain in the Champions League on Wednesday night (8pm).

Manchester United survived a major scare against Southampton on Sunday to pick up all three points.

The hosts raced into a first half lead courtesy of goals from Jan Bednarek and James Ward-Prowse, who capitalised on some poor Red Devils defending.

However, United turned the game around following Edinson Cavani’s introduction at the interval.

The Uruguay international provided an assist for Bruno Fernandes before scoring twice himself to give Solskjaer’s side all three points.

And speaking after the game, the United manager opened up on his players and revealed Telles had suffered a slight injury in the closing stages of the game.

“It’s a knock just above the knee,” Solskjaer said of De Gea’s injury.

“So we’ll have a scan and check on him tomorrow. Hopefully he can be ready for Wednesday but can’t promise anything now.

“Dean [Henderson] came on, very assured, had a couple of half-saves to make but he was tidy and safe with the ball at his feet.

“Anthony had to stay in the hotel, he got ill overnight and he is down here still. Paul and Scott hopefully can start training with us tomorrow, Luke is out still, we’re not 100% sure.

“Jesse [Lingard]’s back. Phil Jones is out {and also ineligible]. David: I don’t know how he’ll react to his knock and bang.

“Alex had an issue towards the end but hopefully won’t be too bad.”

Cavani was the star of the show for United but Solskjaer criticised the veteran for failing to be ready on time.

He came on at the interval, replacing Mason Greenwood, but was late to the party after not having the right boots on hand.

And Solskjaer said: “He probably wasn’t able to warm up on the pitch [at half-time] but then suddenly he realised he needed bigger studs and I’m happy he did.

“I don’t know he might have to learn on that one as a sub you always have to be ready. I know more than anyone about that.”

Meanwhile, Southampton boss Ralph Hasenhuttl took a swipe at United players for jubilantly celebrating their win in the dressing room after the match.

“You can hear them (Man Utd) celebrating in their dressing room,” he said.

“You know what you have done today and how tough an opponent you have been because they were celebrating like they had won the Premier League.”

Spurs could only manage a draw against Chelsea on Sunday, while Liverpool drew 1-1 with Brighton in their showdown on Saturday.