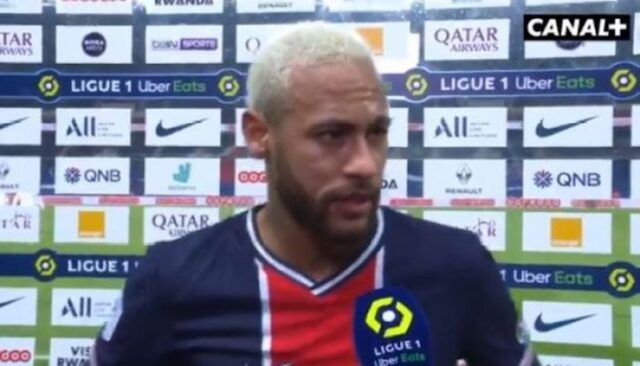 Paris-Saint Germain star Neymar Jnr has spoken about his side’s chances when they face Manchester United in the Champions League next week.

Neymar, 28, famously joined Paris-Saint Germain from Barcelona in 2017 in a transfer which cost the Ligue 1 giants an eye-watering £199.8m, as per Transfermarkt.

Since his arrival in Paris, Neymar has featured in a total of 94 matches in all competitions and has been directly in a hugely impressive 181 goals.

The world-class Brazilian’s latest contributions came during his side’s 2-2 draw to domestic rivals Bordeaux on Saturday evening after he scored from the spot after 27-minutes.

Speaking after the game, Neymar weighed in on his team’s chances of beating United next week when the two giants collide for the second time in this season’s Champions League.

After both sides were drawn into the same group for the illustrious competition, United and Paris-Saint Germain faced-off against one another in Group H’s opener last month.

Ole Gunnar Solskjaer’s youthful Reds travelled to Paris and took all three points away from the Parc des Princes after seeing off the Ligue 1 champions 2-1 in a hotly contested match.

The return fixture which is scheduled to take place next Wednesday has the potential to decide whether or not last year’s finalists make it out of the group stage.

Ahead of next week’s exciting match, Neymar has warned his team-mates that they’ll have to be on top of their game if they’re to take anything away from Old Trafford.

Speaking live on Canal+, as quoted by Metro, the 28-year-old said: “We have to improve because otherwise, whether in the league or in the Champions League, we have to do better.

“Usually we win more matches. If we do not manage to do that it will be complicated in the league as in the Champions League.

“We know the importance of Wednesday’s match, like the match against Leipzig, where we didn’t play well even though we won.

“On Wednesday, we will try to play our best game, to play well but we have to improve, play more as a team and be better organised otherwise it will be very difficult.”