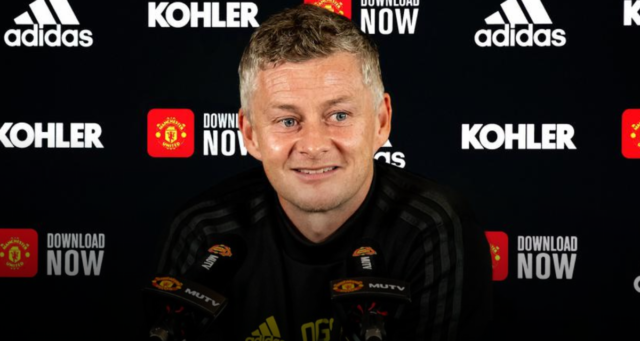 🗣Solskjær: “We have communicated with Edinson [Cavani] and he is really sorry for the mistake he’s made. No malicious intent at all, just an affectionate greeting to a friend.”

🗣Solskjær: “He’s [Cavani] been asked by the FA to explain and we will support him. It’s one of those unfortunate situations where he’s just come into the country and in Uruguay it’s been used in a different way.”

🗣Solskjær: “We support him [Cavani], but we also support the FA. We want to be in the fight against discrimination. I’m sure Edinson has learned the hard way.”

🗣Solskjær: “The training group today was a big one, everyone wants to be involved and everyone has held their hands up for selection.”

🗣Solskjær: “The quicker you qualify the better. We want to win the group, we go out there in our style with attacking intent and defending well against a top team, of course — our mindset is to win the game and win the group.”

🗣Solskjær: “From knowing him, that will give him energy. He is so professional. And he will work on his mindset today to get ready for the game.”

🗣Solskjær: “He [Cavani] is ready to play and of course it’s special for him to play against PSG, his old club where he is the top scorer, so that will affect him mentally.”

🗣Solskjær: “He [Cavani] has learned a lesson. It might affect him, but he will have to put that to one side when the game is on. The best players can put those things aside.”

🗣Solskjær: “He [Erling Braut Haaland] will beat it [Ole’s Champions League record] very easily — the boy was great to work with and some part of me feels proud to have a little input in such a rise and I’m sure Erling will score many goals in the Champions League.”

🗣Solskjær: “You lose the chance to win or lose the title in the first eight to 10 games if you don’t keep up with the pack. But we don’t win it in those games.”

🗣Solskjær: “We can talk as much as we like and give players belief, that belief in their performances and what we do day-in, day-out, like Donny [Van de Beek] next to me has the attitude of ‘every day is important’.”

🗣Solskjær: “I feel my squad is ready to do better than last season. Last season we were the best of the rest so let’s see if we can move up the table.”

🗣Solskjær: “He [Cavani] has already learned two English words – ‘tomorrow, off’. He wants a day off after a win — when we win a game he already knows that one!”

🗣Solskjær asked about transfers: “Here we go… on the eve of an important game against PSG and we’re talking transfers.”

🗣Solskjær: “I think there’s only one position here that we can only say is between Dean [Henderson] and David [De Gea]. The rest have got ability to play in different positions.”

🗣Solskjær: “You try to give him [a developing player] advice and help him, but deep down the player decides how good they can become. If they have the determination and ability to learn, of course we’re here.”

🗣Solskjær: “We know he’s [Cavani] got talent and I could have spoken about his predatory instincts as a striker but what I noticed what his ability to be a team player, which we’ve already seen here with his work rate.”

🗣Solskjær: “His [Cavani] running stats show him top of the Premier League, which at 33 tells you everything.”